What is a Nanoparticle Deposition System?

Nanoparticles can be made from a range of materials such as polymers, metals, and ceramics. Nanoparticles have very high surface energy, due to their small size (1-100nm), which is an advantage for applications such as catalysis and sensing. However, nanoparticle stability can be a challenge as nanoparticles will often try to lower their surface energy.

Nanoparticles usually stabilize themselves via molecule sorption from the surroundings or decreasing the surface area via agglomeration and coagulation which is generally not desirable. Embedding nanoparticles in a matrix or thin-film can help to reduce this problem.

There is a range of different coating methods that nanoparticle deposition systems employ.

This technology is a physics-based process that generates pure particles in a controlled setting without using chemicals. Carrier gas flows past two electrodes of conductive material where an electrical spark creates a plasma that ablates a small amount of materials from an electrode. This material forms a concentrated stream of nanoparticle aerosol and these particles then combine to form bigger particles. The nanoparticles are then deposited onto a substrate by diffusion, filtration or impaction.

What is Thin Film Deposition?

The thin film deposition process involves creating and depositing atoms onto a substrate material to form a compact two-dimensional layer. These thin films can be made from a range of materials including compounds, oxides, and metals.

The various characteristics of thin films are used to enhance or alter the substrate performance. For example, some coatings are transparent, some increase the conductivity of transmission of signals, and some are scratch-resistant.

The Differences Between a Nanoparticle and Thin Film Deposition System

Nanoparticle deposition systems create coatings that are three-dimensional and more porous than those of thin films. They also offer a rough surface with a higher surface area than thin films. The properties of nanoparticles coatings are strongly influenced by the nanoparticle size and structure and as a consequence, they behave very differently to thin-film coatings made from the same material. 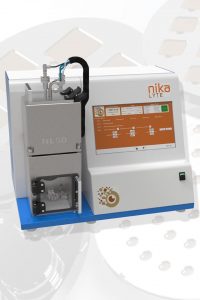 This website uses cookies to improve your experience while you navigate through the website. Out of these, the cookies that are categorized as necessary are stored on your browser as they are essential for the working of basic functionalities of the website. We also use third-party cookies that help us analyze and understand how you use this website. These cookies will be stored in your browser only with your consent. You also have the option to opt-out of these cookies. But opting out of some of these cookies may affect your browsing experience.
Necessary Always Enabled
Necessary cookies are absolutely essential for the website to function properly. These cookies ensure basic functionalities and security features of the website, anonymously.
Functional
Functional cookies help to perform certain functionalities like sharing the content of the website on social media platforms, collect feedbacks, and other third-party features.
Performance
Performance cookies are used to understand and analyze the key performance indexes of the website which helps in delivering a better user experience for the visitors.
Analytics
Analytical cookies are used to understand how visitors interact with the website. These cookies help provide information on metrics the number of visitors, bounce rate, traffic source, etc.
Advertisement
Advertisement cookies are used to provide visitors with relevant ads and marketing campaigns. These cookies track visitors across websites and collect information to provide customized ads.
Others
Other uncategorized cookies are those that are being analyzed and have not been classified into a category as yet.
SAVE & ACCEPT
Scroll to Top
Scroll to Top